Founder and Director of Neighborhood Crusades, Inc., Successfully reaching Youth and families for over 40 years, since 1970.

• As a Juvenile Aid and Gang Control Officer he investigated over 4,500 cases, gaining an in-depth knowledge of the contributing factors which influenced young men to get involved in gangs and drugs.

Has personally conducted Assembly Programs at over 600 public schools since 1968, addressing more than 600,000 students.

Board Memberships (Past and Present)

• Rev. Floyd is constantly being called on to lecture in area colleges and Universities

Rev. Floyd has received over 100 Awards and Citations. Some are listed below.

• One of the "Ten Outstanding Policeman in the World"; International Chiefs of Police at Miami, Florida (1969)

• One of "Ten Outstanding Young Men in America in 1969"; US Junior Chamber of Commerce at Santa Monica, California

• One of "Three Outstanding Men" in 1970; Pennsylvania Junior Chamber of Commerce

• One of ten Americans cited for bettering race relations; The National Publishers Association at Chicago, Illinois (1979)

• "Volunteer of the Year"; Delaware Valley Council of Volunteers (1970)

• "Man of the Year"; Most Worshipful Prince Hall Grand Lodge F and A. Masons of Pennsylvania (1977)


The Rev. Melvin Floyd has been a policeman for the last thirteen and a half years and a part-time Baptist minister for the last seven
On Tuesday Mr. Floyd will turn in his badge to devote all his time to being a "missionary of the streets".

"I feel an urgency to bring the message of God to the streets as an urban missionary and I need more freedom of movement and time to devote to this job," Mr. Floyd said during an interview last week.

Mr. Floyd has been a patrolman assigned to the community relations division and is known for his work with gangs.

AN INTENSE and sensitive man with deep convictions, Mr. Floyd, in a voice filled with emotion, said his decision to resign wasn't easy. He also talked with pride about I have been a policeman for thirteen and half years and I have seen man's inhumanity to man. After a while you begin to ask yourself, 'why does brother murder brother and father murder son?" Mr. Floyd, a thirty seven year old father of three girls added:

"For the past six months I have asked myself how can society and an individual help combat all of that Material things and wealth are important but after one has obtained this, you know it is not the total answer and the problems don't go away.

"I am convinced that if everyone would follow the teachings of Jesus Christ the problems of our society would go away. The job of carrying that message of love is a full time job, one that I could not do as a policeman."

He said his wife, Elizabeth, backed his decision to resign 100 percent.

"We've talked about this a lot and my wife is happy that I have finally decided to give it up."

He plans to withdraw all of the money from the police pension fund, rather than freeze it, and use it to put in full operations the Neighborhood Crusades Center at 346 W. Queen lane in Germantown.

The center is an evangelist organization that he has directed part-time for the last two years.

"I am calling myself a missionary to Philadelphia and plan to take my ministry to the street," he said.

We are putting massive funds into building model cities in this country, but my question is where do we find he model citizens to inhabit those cities?

"There is need to change the individual and instill in him new values and new principles. The only way I know that can be done is through God."

He said he intended to take his street ministry to the "thousands of children" who have never walked into a church.

The youngest of six children, Mr. Floyd grew up in North Philadelphia, dropped out of school in the 11th grade and was involved in gangs.

"I was arrested for gang fighting as a juvenile but fortunately that one encounter with the law got me on the right track again," said Mr. Floyd, a Korean war veteran and graduate of the Philadelphia School of Bible.

Reflecting on his career as a policeman, one that began as a beat officer on Columbia ave., he said, "I have kept two promises that I made when I was a rookie.

"One, to never let the job change me and to try to influence those around me, and, two, to treat everybody with decency and respect and demand the same in return."

He has received more than 100 letters of commendation and national awards for his work with youth, including being named one of ten "Outstanding Young Men in America in 1969" by the Junior Chamber of Commerce.

Police Inspector Raymond Nugget, Floyd's commanding officer, said of his leaving the department, "Melvin was an asset to the department but he has another calling.

"He will be missed and we wish him good luck." 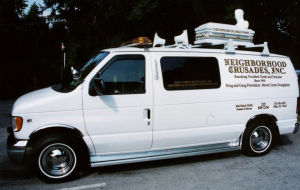